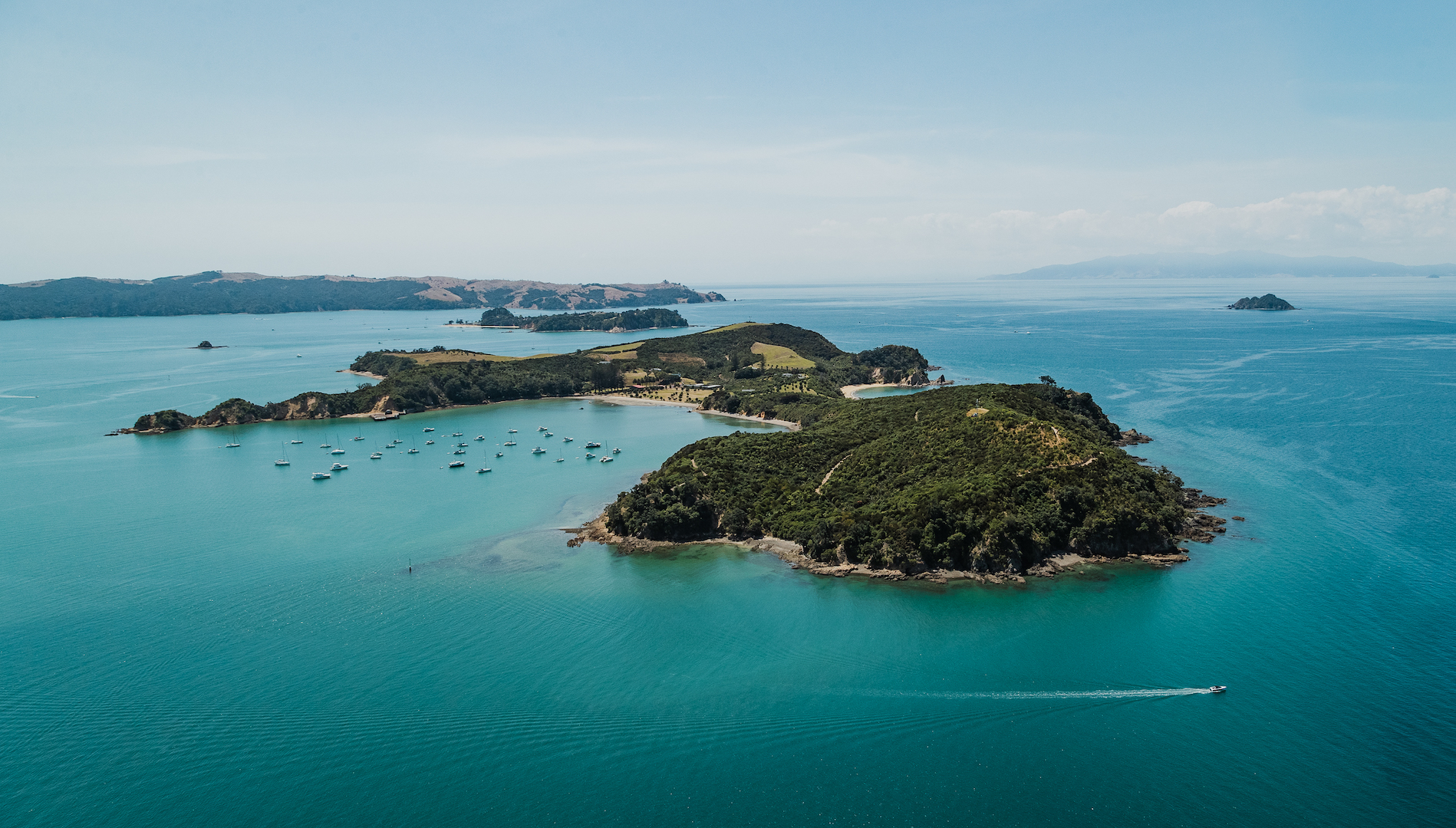 In 2020, TripAdvisor used tourist data to find New Zealand’s least known but highest rated destinations. Top of the list was Rotoroa, a small 200-acre island located just east of Waiheke Island, a short ferry ride away. Among the reviews you’ll repeatedly read about the peace, beauty, abundant wildlife, informative guided tours, hospitality, and clean accommodation. But this place is more than the sum of its parts. It’s an island that has a continuing legacy of recovery and renewal – of people, the land, and our rare and endangered species.

With four stunning swimming beaches, visitors have plenty of choice! This is Ladies Bay, easy accessed and offers changing facilities and a BBQ.

Rotoroa was New Zealand’s first and longest running addiction treatment centre (1911 – 2005) run by The Salvation Army. The ‘Sallies’ supported more than 12,000 clients on their road to recovery, the peaceful island allowing them time to recover and reflect. In 2005, the Sallies relocated to the mainland to continue their work, through community-based programmes.

When the Sallies considered how to continue their legacy of restoration and renewal, they did not need to look far – nestled as it is in the heart of the Hauraki Gulf Marine Park. The Park is home to more than 50 predator-free island sanctuaries. By adding another predator-free sanctuary to this impressive line-up, Rotoroa become another important link in the Gulf Island chain of safe havens for rare and endangered native species.

In 2008, the Rotoroa Island Trust was established through a generous gift of private philanthropy, purchasing a 99-year lease from The Salvation Army with a vision to transform Rotoroa Island into a wildlife sanctuary the public could visit. More than 20,000 pine trees, planted as shelter belts during its earlier history as a farm, were felled to make way for 350,000 native plants. A programme to remove rats and mice saw the island declared pest-free in 2015.

Meanwhile, some buildings were demolished, while others, such as the original jail, 1860’s schoolhouse and butchery, were restored to preserve an interesting slice of the island’s history. An award-winning museum and exhibition centre was built, with a tip-of-the-cap to the iconic woolshed, celebrating the many years of the Salvation Army history as a dedicated addiction treatment centre. Walkers on the Northern Loop Track are rewarded with a 360 degree panorama over the Hauraki Gulf.

In 2011, Rotoroa Island opened to the public, serviced by a 40-minute ferry ride on Fullers360 from downtown Auckland. Not long after, it began its next phase of native species restoration, in partnership with Auckland Zoo. Through this relationship endangered native species were released on the island, including takahē, tīeke / saddleback, kiwi, skinks and pāteke / brown teal.

The Department of Conservation (DOC) has continued to support the endangered species programme, and as ecosystems have restored, Rotoroa’s remnant native species have recovered and are breeding successfully. These include riroriro / grey warbler, oi / grey-faced petrel, tūī, ruru / morepork and tūturiwhatu / New Zealand dotterels, as well as occasional visits by kākā.

Fyffe, one of Rotoroa’s resident takahē

All this is managed by a small, dedicated team in situ. The Department of Conservation (DOC) assists with the takahē programme, while Auckland Council provides help with biosecurity. The island also has an ongoing partnership with Save the Kiwi, providing a safe haven for kiwi chicks at their most vulnerable stage (until they reach around 1200g). If you’re lucky, you might share the ferry with a species being translocated, and for overnighters, short moonlit walks will always be accompanied by the echoing calls of weka. You may also be rewarded with the cry of kiwi, and perhaps (if you stay very quiet), a glimpse of our national icon.