Hiding from Auckland City behind the mass of Waiheke Island is a jewel.

Hiding from Auckland City behind the mass of Waiheke Island is a jewel. Golden beaches, turquoise waters and emerald slopes of native plant life. Rotoroa Island is the proof that good things come in small packages.

After a scenic 75 min ferry ride from downtown Auckland, Elishea and I were at the wharf at Rotoroa Island. It was to be a day of walking, relaxing and observing wildlife. Before we could get on our way however, there was a talk to be given to all who were visiting by one of the island’s rangers. The ferry passengers all gathered in the shed at the end of the wharf to be given the lowdown by the island Ranger on what we could and couldn’t do that day. It was a short, friendly and reasonably informative chat about some of the pests that they want to keep off the pest-free island. There are a few islands in the Hauraki Gulf that are pest-free and when you visit you get asked to check bags and footwear for any unwanted hitchhikers such as mice, rats and ants. It’s easy to check, so even if you’re really sure that your stuff is pest-free, check it anyway. 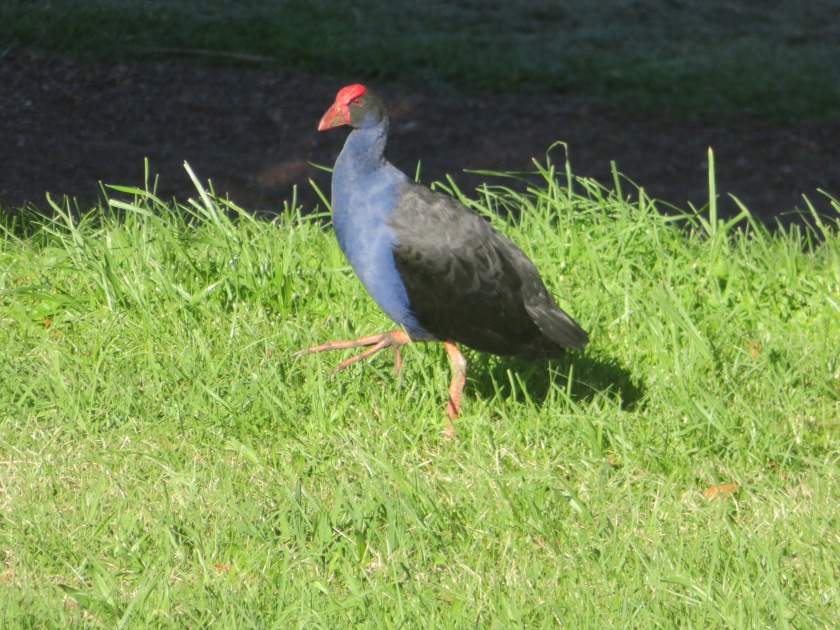 Pukekos roam throughout the island

Leaving the shed, we had the entire day ahead of us. With the only ferry home leaving at 5:15pm, we had 7 hours to explore the island. With Rotoroa only covering around 82 hectares, we decided we’d walk around the whole island and try and see as many of Rotoroa’s famous residents as we could before the ferry. 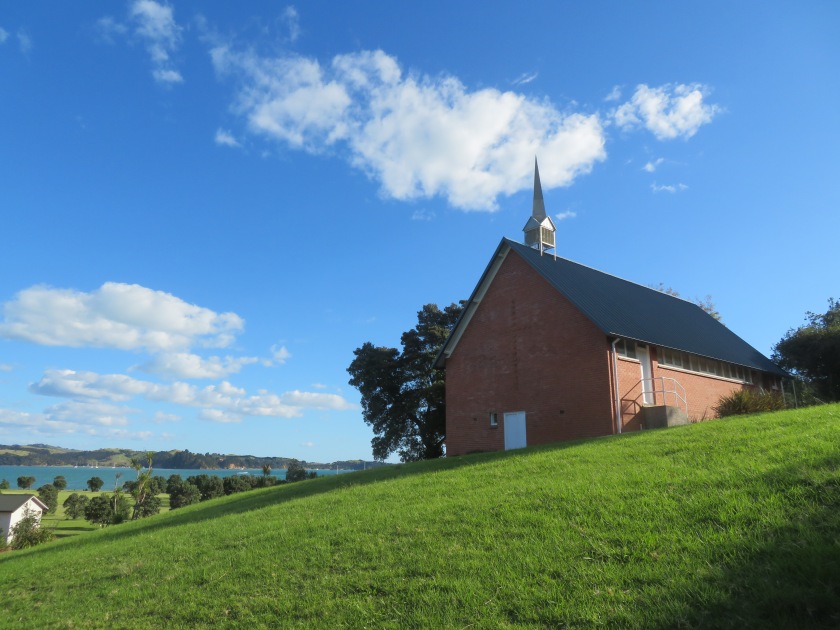 As far as wildlife is concerned, Rotoroa has some of the heavyweights of New Zealand birdlife. While you’ll still find the more familiar NZ birds such as Tui, Fantail, Kingfisher and Pukeko, you also have the chance to see some rarer species- but more about them later. The island is now a sanctuary for endangered species and native NZ wildlife.

Although Rotoroa is now a paradise for tourists and birdwatchers, it hasn’t always been the case. Rotoroa has had an interesting history.

The island is owned by the salvation army and was used as a rehabilitation centre for alcoholics since 1911. After nearly a hundred years the salvation army decided to move their services onto the mainland and therefore vacate the island. After the Salvation Army left, the Rotoroa Trust was established and leased the island for 99 years from the Sallies. The trust focused on making a sanctuary for wildlife and a place that would educate visitors on New Zealand’s fantastic flora and fauna.

Walking down the road from the wharf, we approached the main visitors centre. A modern structure with a small museum about the salvation army’s time on the island. It was all very interesting and well laid out. It’s also a good place to fill up water bottles and use the toilets. Around the visitors centre are also buildings that were from the rehabilitation era of the island. A chapel is perched on the hill, along with a small jailhouse and other wooden buildings. As interesting as this all is, it wasn’t the reason for visiting the island. We came to see some birds and get a decent walk.

Cheeky Wekas can be found all over the island

The great thing about the island is that it’s not a difficult place to walk. With no real hills and the fact you can’t get lost due to its size, it’s easy to follow the network of footpaths that criss cross the island using the small map available from the visitor’s centre. We decided we’d head off to explore the southern side of the island first. A good decision it seemed as we soon came across one of the reasons that we’d come to Rotoroa.

Takahe. A bird that has not only come back from the brink of extinction, but actually come back from extinction. It was presumed extinct as no Takahe were spotted for many years. Until, one Invercargill doctor rediscovered the bird in the remote Murchison Mountains of Fiordland in 1948. Now, thanks to that rediscovery and conservation efforts throughout New Zealand, numbers of the bird are up to around 347. This makes it an extremely rare bird and a privilege to see. Some birds are moved from the Murchison Mountains to predator free islands such as Rotoroa for breeding and then re-releasing back to their alpine homes.​

As we walked along the path, in a grassy area only metres away was one of New Zealand’s rarest birds. It’s a striking bird of considerable size. Petrol-slick colours of purples, blues and greens on a big round body with a powerful, bright red and rounded beak. We watched this particular Takahe for a little while before getting a few photos of it feeding on the grass. Then, sure that we were in for a good day, set off on the rest of our walk.

The next stop was at one of the island’s stunning beaches, Men’s Bay. A curved golden bay that looks out across the Hauraki Gulf to the Coromandel. At this point, standing on the deserted beach, it was hard to believe that Auckland City was only a 75 min ferry ride behind us. The beautiful beaches of Rotoroa Island certainly are a fitting place for rehabilitation. 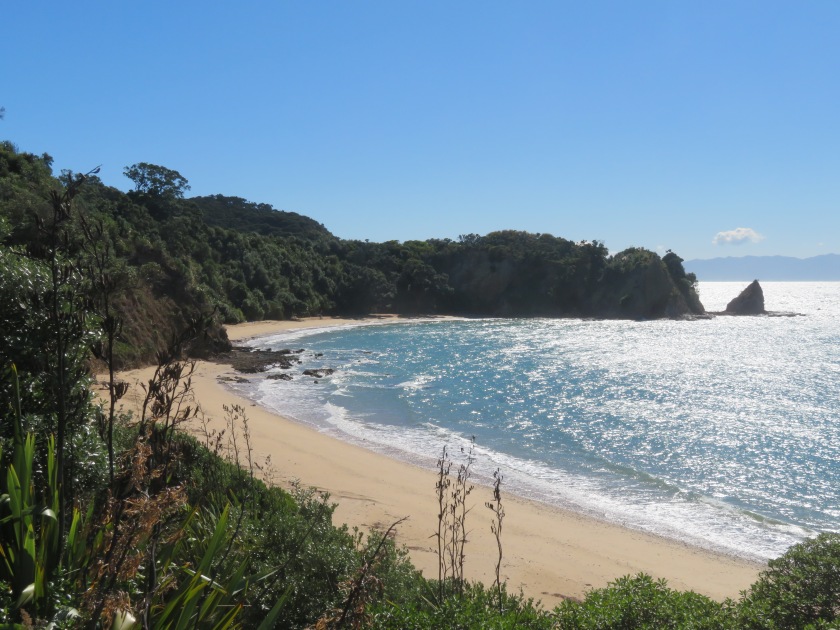 Pulling ourselves away from the beach, we continued on our walk around the edge of the island. The amount of life around Rotoroa is truly awesome. Fantails flew around our heads in numbers I’ve never seen before, while Wekas ran in front of our path as we walked. The characterful Weka seem to love their predator-free life on the island. Known for being curious and cheeky, the island’s ranger mentioned they have a tendency to make off with people’s belongings on the beach while their victims are swimming in the sea- apparently they especially have a thing for watches!

Not that we would see them in the middle of the day, but the island boasts a population of Kiwi that have been released on the island. There are a few accommodation options for the island including a bunk-style building and a small amount of holiday homes. So, perhaps if we decided to stay one night, we might come across one then. 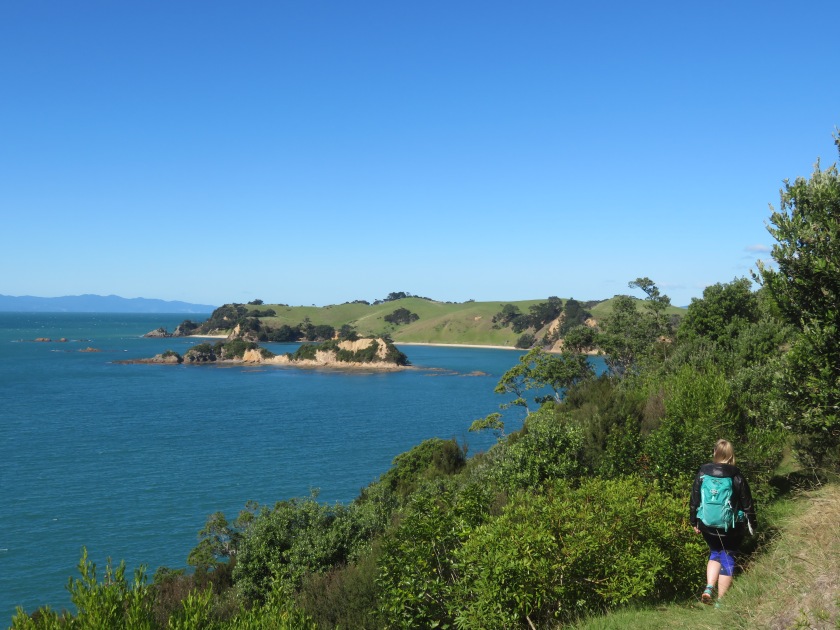 It didn’t take us long before we had walked around the whole of the southern side of the island. A quick refill of our water bottles and stopping for some lunch near the visitors centre, we were ready to explore the northern half.

From the visitors centre, we headed to Ladies’ Bay. Yet another amazing beach with views across the length of the Coromandel Range. These beaches are perfect for swimming in the summer and had it have been slightly warmer I would have got in.

Sat on the northern edge of Ladies’ Bay was a beautifully positioned cemetery. Used for the patients and staff that lived on the island during it’s time as a rehabilitation centre. I can’t think of a better position for such a place. A white picket fence enclosed a small number of burials all looking over a lush valley. An interesting piece of the island’s history and amazing views along the coast.

From the cemetery, it was a small climb up to the highest point on the island, North Tower. A grassy knoll that gives 180 degree views of Rotoroa and all the surrounding islands. A great place to sit for a while and take it all in. It isn’t much of a climb and is definitely worth the short hike up.

We descended from North Tower down to our final beach for the day, Cable Bay. What a beach it is. It reminded me of a beach in the Abel Tasman with its golden sand and crystal clear water. The great thing about making the effort to go to Rotoroa is that, because of the limited number of people on the ferry, you can have a beach like Cable Bay to yourself for the day.

Between Cable Bay and the walk back to the visitors centre was another surprise from the island. A small pond next to the footpath held a very special pair of ducks. The endemic pateke, or brown teal as they are also known, are the rarest waterfowl in New Zealand. Numbering only 2000-2500 in total, this pond held some pretty important residents. Due to hunting, habitat loss and a number of other factors these birds are still at risk of extinction. It’s yet another reason why places like Rotoroa Island are so important. 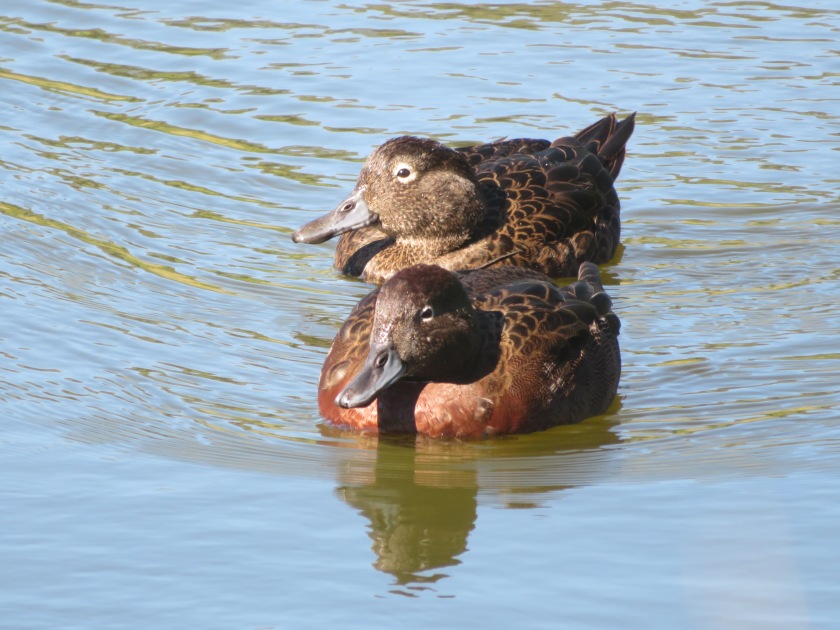 The last thing to do from here was to make our way back to the wharf for the ferry. Slowly and reluctantly we dragged our feet back to our departure point. After having visited a few islands in the Hauraki Gulf now, I have to say that there was something particularly special about Rotoroa. It’s not only the array of rare wildlife that’s easily seen and the interesting history of the island. Rotoroa’s modest size makes it feel like an island getaway and the small number of people on the island make it feel as though it’s your own.

It was with heavy hearts that we pulled away from the wharf and watched the small island of Rotoroa get even smaller on the horizon. Back to the city and normal life. The only consolation, knowing that it’s only a short ferry-ride away.

Enjoyed this blog? Check out more of Ash's blogs as he experiences Aotearoa NZ On Foot